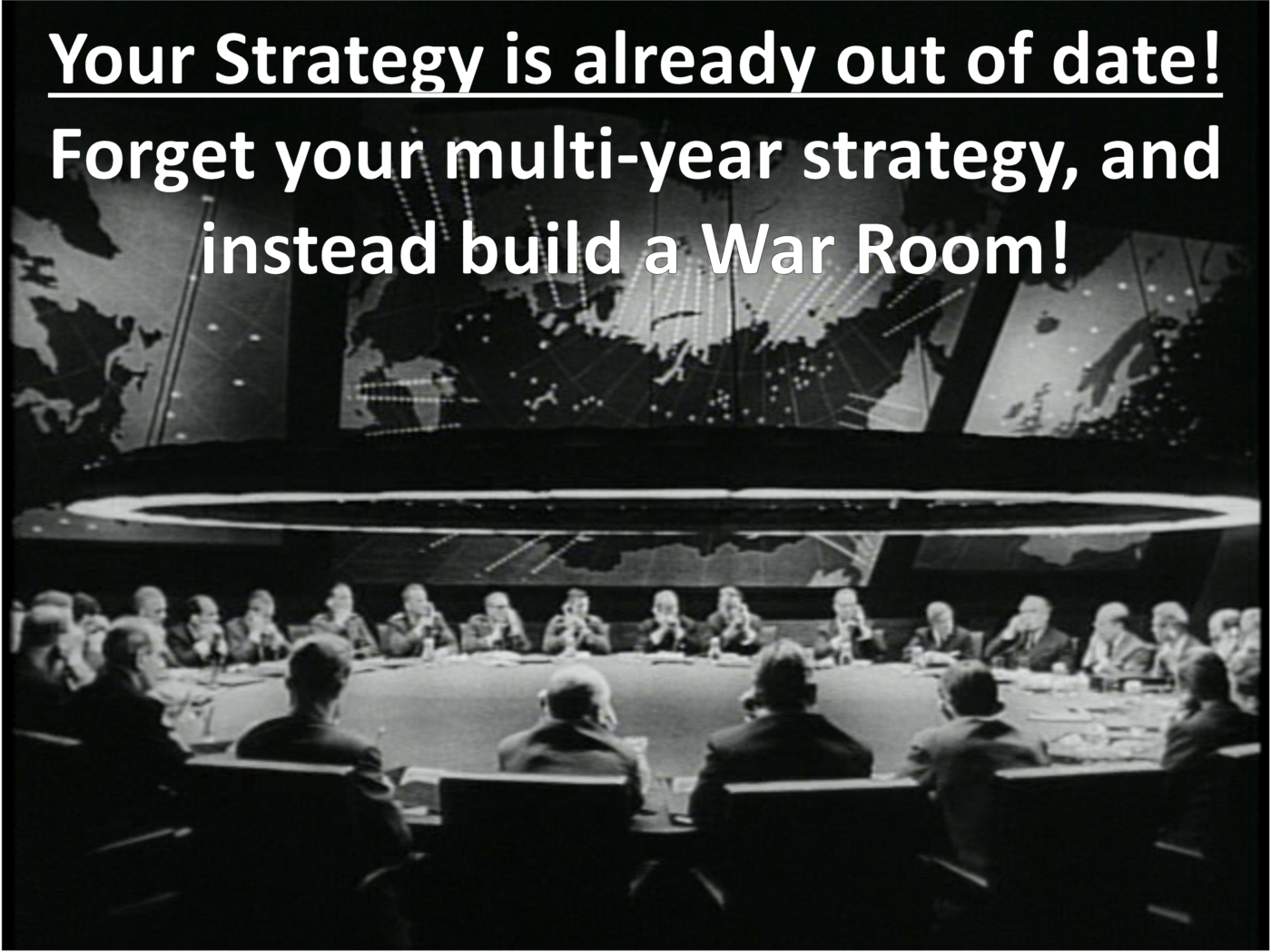 There is no doubt that 2021 was a year of change, and this is not a new trend. The amount of change that occurs in our lives (personal, professional, technological, global…) seems to be speeding up year on year.  I have been reflecting on that feeling at the start of 2022, and thinking about how constant change will impact my yearly goals (both personally and at work).

Gone are the days that we could set a plan for the year, and that plan would stay relatively unchanged over the 12 months.  Nowadays my team is reevaluating our goals and strategy every 3-4 months.  Some projects continue in their importance, but some of our projects are shifted into new directions, if not stopped all together.  In today’s environment, goals and strategies become out of date far before the yearly strategy / goal setting cycle.  So why do we continue to set yearly goals, when we know that half of them are going to be obsolete in just a few months?

I think that setting yearly goals and strategies is a byproduct of how humans evolved.  One year marked the seasons, agricultural planting / harvesting, and some of the initial industrial supply / demand cycles.  One year was a great frame of reference for most of humanity’s existence, especially when major changes occurred over years and even decades.  But in today’s environment, industries and the way we work can shift multiple times within a year.

The uncomfortable truth we need to recognize is that we need to be a lot more nimble in our strategies and goal setting.  We need to stop making detailed strategic plans, and expecting them to remain unchanged.  Instead, we need to improve our ability to quickly gather intelligence, collaborate, and make rapid strategic decisions.

I was introduced to the failure of yearly goal setting / strategic planning by the book “Nine Lies About Work: A Freethinking Leader’s Guide to the Real World” by Marcus Buckingham and Ashley Goodall.  Nine Lies uses research, data, and engaging stories to identify and dismantle some of the most common beliefs we hold about work and replace them with simpler truths.  My personal belief is that every senior leader and HR manager needs to read Nine Lies.  In 2021 I wrote about six of the Nine Lies and this is number seven. There is no order and all are relevant.

I can personally attest that some of my core beliefs about leadership and high performance were completely shook up.  For example, I am a huge believer in setting goals, but after reading Nine Lies, I have started to question the effectiveness of translating those goals into long term plans.  That is why I have written this article (and the overall series on Nine Lies).  My hope is that these articles can open your eyes to the need to think about leadership and talent differently, and I also hope you buy the book.

Plans Are Static, But Your Company Needs to be Dynamic

Incredibly detailed yearly or multi-yearly plans don’t work anymore, but that doesn’t mean we just sit back and do nothing.  Instead of creating the perfect plan, your goal should be harnessing the intelligence of your people.  To do that, you need to move information across your teams and organization as fast as possible, while simultaneously empowering your people to act on that information.

When people are given accurate, real-time, and reliable data about their situation, they make smarter decisions.  On the flip side, imagine making strategic decisions without data.  How can you make a decision about your products / services / projects without information about what your competitors are doing, what your customers are needing, or what your suppliers are feeling?  Making strategic decisions without information will often lead to failure, and in some cases even death.

The Battle of Britain Bunker

The best example of a team / organization making critical strategic decisions by using empowerment and fast moving information is the Battle of Britain Bunker.  Created by the British Royal Air Force to lead the aerial defense against the Nazi’s, this approach to information sharing and empowering leaders effectively doubled the defense effectiveness of the RAF (from a 30-50% interception rate to a 90-100% interception rate).

At the core of his dramatic improvement was the Bunker’s map table.  “The map table captured thousands of returns from the Chain Home radar system each minute, plus thousands more from the friend-or-foe system, plus, for every twenty-four hours, a million individual reports from the Royal Observer Corps, each relayed to the room within forty seconds. (Buckingham & Goodall)”

“No plan ever services contact with the enemy” is a famous quote.  The RAF knew this. Instead of spending countless hours making strategic deployment plans that would become obsolete, they built an incredible intelligence system.  They were able to synthesize an incredible amount of information. They then provided that information to front-line leaders who were able to make real-time decisions on where to send their forces.

Create your own War Room

Today the majority of political campaigns, crisis centers, tv studios, and operation centers have some version of the British Bunker “war room”.  But instead of a room-sized map of the UK with model planes, these war rooms are filled with screens showing a plethora of real time information.  Unfortunately, this approach is often relegated to the Ops or IT teams.  Not enough teams leverage the power of real time data to make important decisions.

But this is something you can change.  You don’t literally need to be at war to create a war room.  In fact you don’t even need a room.  At its core a war room is just one way to harness data and empower your people to make rapid decisions. The best way to create your own revolves around 3 simple steps.

A War Room Requires a Different Kind of Leader

A war room requires a different kind of leader.  A war room leader isn’t about setting a perfect plan, and having everyone perfectly execute that plan.  They already know that a perfect plan is impossible.  Instead they focus on setting thematic goals for their people. That allows their frontline teams to review data and make real time decisions.

From experience, this is a tough ask for a lot of leaders.  I know I personally wanted my team to execute the strategy I had laboursly created with my boss.  And this is where I remember the hypocrisy of the top down approach.  I know I wanted my team to execute the plans I had created, but at the same time I hated when my boss didn’t allow me the opportunity to create my own goals.

The truth is that high performance is never achieved by everyone blindly executing the plan.  That level of blind obedience only works in classical music.  Beethoven and Mozart wrote all the notes down. The job of the conductor is just to make sure everyone plays the notes correctly.  But real life isn’t like classical music.  Real life is like jazz.  Things change, and sometimes improvisation and a change in direction is necessary.  The role of a jazz band leader is to set a basic framework, and then trust their people to make the right decisions.

Take the First Steps into Becoming a War Room Leader

If I am being honest, the concept of a war room replacing a strategic plan is one of the most difficult concepts in Nine Lies.  Not difficult in the sense of understanding, but difficult in the sense of execution.  I think we all know that life is constantly changing, and we all want to be able to make nimble decisions using real time data.  The challenge is that creating the intelligence systems required to make those decisions is tough.

But just because it is tough, doesn’t mean we shouldn’t try.  I recommend every leader start by answering these 3 questions:

So even if you can’t convert a meeting room into your team’s personal war room, answering 3 questions is a great first step into creating your own version of a war room.