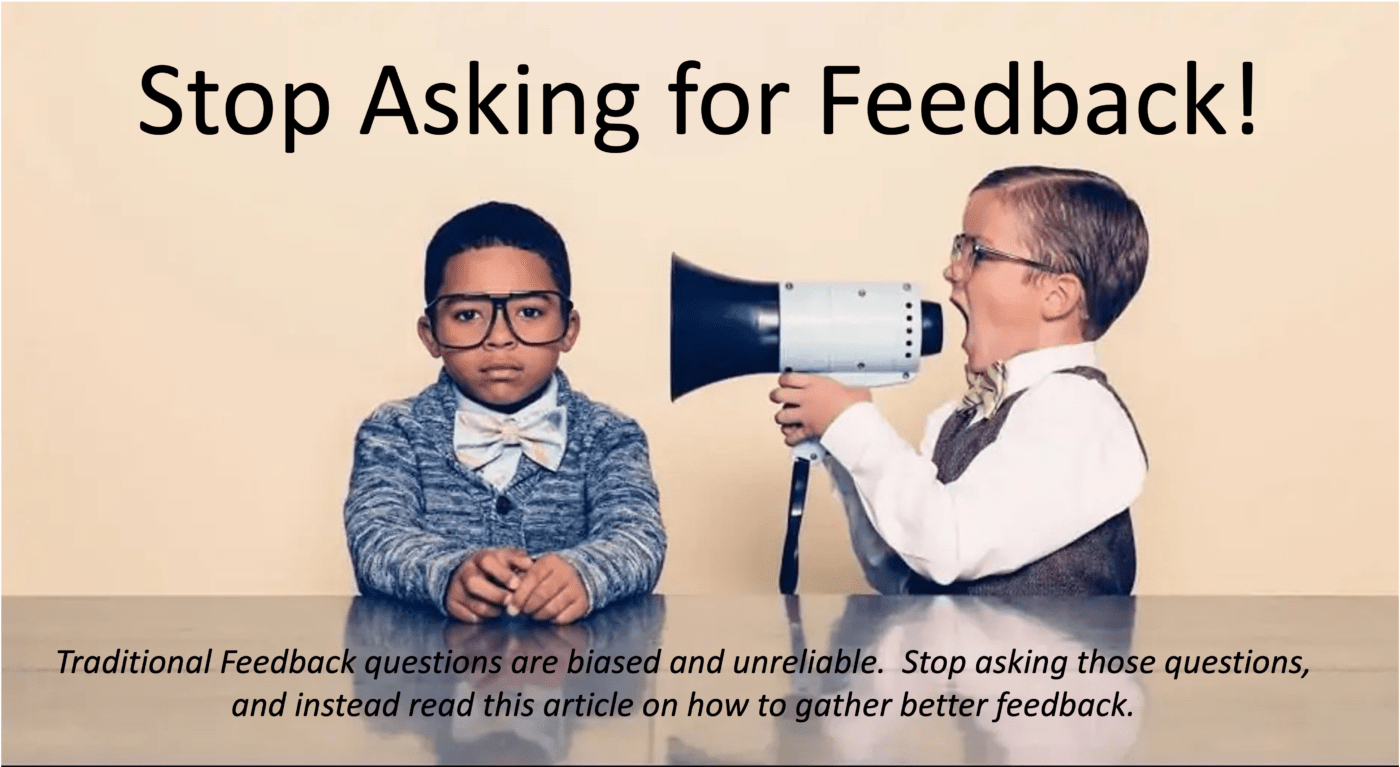 Modern day performance management is built around a simple idea: gather feedback from stakeholders and use that feedback to make informed performance decisions.  And in many ways, this makes total sense.  A manager cannot see every project or interaction their people have.  So much of what a person does occurs outside of the view of their manager.  So I fully understand when managers want to gather feedback on their people.

Gathering feedback on someone for a performance review or a developmental conversation can take many forms.  In truth it can be as simple as a manager asking someone for feedback when they see them in the hallway.   I personally love the simple approach of “Start/Stop/Continue”.  By asking 3 simple questions, you can get a quick snapshot of what you need to start doing, stop doing, and continuing doing in order to be successful.

The problem with gathering feedback is that companies, managers, and many HR IT systems never allow it to be that simple.  Instead of 3 questions, they want a survey based on competencies and skills.  So people start rating the employee on things like their ability to motivate others, their strategic mindset, their management skills, and pretty much any skill you can think of.  In the end, the manager and the employee are given a fancy report that shows the competencies / skills the person is best at and what they need to improve.

That kind of report might sound like a wonderful tool to conduct performance and development conversations, but ultimately it is built upon a lie.  The truth is your colleagues have no idea if you have a strategic mindset or are great at motivating others.

My mind was opened to the flaws of 360 surveys by the book  “Nine Lies About Work: A Freethinking Leader’s Guide to the Real World” by Marcus Buckingham and Ashley Goodall.  Nine Lies uses research, data, and engaging stories to identify and dismantle some of the most common beliefs we hold about work and replace them with simpler truths.  My personal belief is that every senior leader and HR manager needs to read Nine Lies.

I can personally attest that some of my core beliefs about leadership and high performance were completely shook up.  For example, I was a huge believer in competency models and their use in 360 surveys.  Over my career I built quite a few.  But after reading Nine Lies, I have started to question the effectiveness of constructive feedback.  That is why I have written this article (and the overall series on Nine Lies).  My hope is that these articles can open your eyes to the need to think about leadership and talent differently, and I also hope you buy the book.

Who you are impacts how you rate other people

One of the biggest problems with gathering feedback stems from a misunderstanding on how people rate other people.  In our ideal world, Carol, Frank, and Marisa can all look at their colleague Jose and have roughly the same perception of Jose’s skill levels.  Sure, Carol’s, Franks, and Marisa’s ratings are all a little different, but when you average out the 3 ratings you will get close to Jose’s “true” skill level.  And as you gather more and more feedback, the magic of the crowd will narrow in further and further upon an accurate picture of Jose’s skill levels.  But this approach hinges upon the belief that Carol, Frank, Marisa, and everyone else are being objective in how they rate Jose and everyone else.

The reality is that the person giving the feedback has more of an impact on the ratings than the person being rated.  Don’t believe me?  A 2000 study by Sculen and Mount assessed the leadership capabilities of 4,932 team leaders.  The assessments were based on feedback from 2 direct reports, 2 peers, and 2 bosses for each leader.  Their original goal was to see what impacted the assessments of these leaders.  Did hierarchies impact how the leader was rated?  Did how someone viewed the leader’s overall performance spill over into how they viewed the leader’s individual skills?  Had specific skills like political savviness or interpersonal skills impacted how the leader was viewed in the overall rating?

The answer they found was shocking.  54% of the differences in how someone was rated was attributable to the idiosyncratic mindset of each person giving the feedback.  I want to believe that if I was asked to rate the performance of 3 of my colleagues, I would assess all three of them individually.  The reality is that I (and you) have an unconscious ratings pattern, and I place that pattern on top of everyone that I assess.  Feedback tools and competency ratings surveys are meant to be these open transparent windows into other people, but surpassingly they are more like mirrors.  You filling out a 360 questionnaire about your colleague will say more about you then it does about them.

You are rating apples while I am rating oranges

The other major problem with gathering feedback is caused to the fact that the feedback is a lot more unreliable than we want to admit.  Gathering feedback in essence is essentially just gathering a bunch of opinions.  In order to address the unreliability,  a lot of modern day 360 surveys and feedback gathering tools focus on specific competencies and observable behaviors.  The idea is that clear definitions remove some of the opinions, and leave a “true” assessment of the person.

But the truth is that clear definitions don’t improve reliability, especially when it comes to complex behaviors.  It is super easy to observe if someone is constantly late to meetings, but most competency lists or feedback tools don’t focus on such simple behaviors.  They want you to provide feedback on a person’s interpersonal savviness, ability to communicate, or their potential to become a manager (to name a few).

The issue with complex behaviors and skills is that people have dramatically different interpretations of what each means.  To demonstrate this, let’s imagine that you are asked to provide feedback on a colleague’s interpersonal savviness skills (from the Korn Ferry competency model).  Korn Ferry defines interpersonal savviness as the ability to relate openly and comfortably with diverse groups of people.  It even identifies some specific behaviors that you should look for:

Most of us wouldn’t think twice about the question.  We would start scouring our brains to think of meetings where the person was tactful or friendly.  The problem, though, is that we never question what some of the definitions actually mean, and this is where the tool becomes unreliable.  The concept of diplomacy, tact, or building rapport might mean different things to different people.  So in the end, you are rating the person against your definition of diplomacy, tact, etc… while the other feedback givers are using completely different definitions.  We are not assessing the person against the same standard.

The Nine Lies approach to Feedback

As you have seen, the traditional way of gathering feedback on skills and competencies doesn’t work.  But just because it is biased and unreliable doesn’t mean we should never ask for feedback.  We just need to do it in a better way, and this is where Nine Lies introduced a new approach.  Instead of trying to counteract the biases of the person, lean into them.  Instead of trying to get people to rate other people, focus them on rating their own experiences.

For example, consider the concept of performance.  Traditional questions would be something like “is this person a high performer” or “rate this person on their ability to deliver on time.”  But as we have shown above, these questions are problematic.  The Nine Lies approach puts the rater at the center: “Do you turn to this team member when you want extraordinary results?”  With this approach you are reflecting on how you would act, which research shows is significantly more reliable and unbiased.

Here are some more examples of Traditional vs Nine Lies style questions on common skills and competencies.

The Nine Lies approach to questions might seem strange at first, but it provides a better assessment of the person.  Buckingham and Goodall said it best when they wrote, “We tend to think that subjectivity in data is a bug, and that the feature we’re after is objectivity. Actually, however, when it comes to measurement, the pursuit of objectivity is the bug, and reliable subjectivity the feature. These questions generate reliable (and subjective) data, and while this isn’t everything, it’s a lot. In the same way that measuring a person’s weight doesn’t give a complete measure of his health, but does at least give a reliable measure of something related to their health.”

For me personally, I have seen first hand the hypocrisy of many feedback givers.  I have had countless versions of the following conversation:

Manager – I think Person X is a great communicator.

Me – Then maybe we should have them present at the next board meeting.

Manager – Ohh… they aren’t ready for that.

It is easy to say someone is great at something without giving it much thought.  That kind of feedback is a waste of time for everyone involved.  If we truly want to help people by providing them clear and helpful feedback, then we need to ask the questions in a way that is reliable and unbiased.  I really love the Nine Lies approach to questions, and I am going to be advocating this approach from now on.  I hope the next time you consider doing a 360, or gathering feedback on someone you consider using it too.