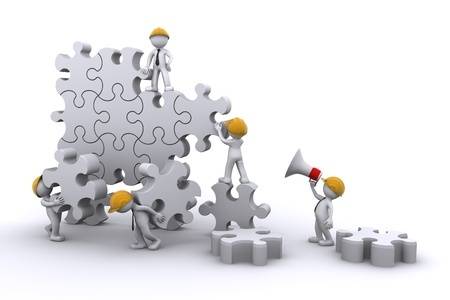 If I’ve learned anything from my 15+ years working in HR, it’s that teams are not static.  They are constantly evolving and reorganizing.  For example, my current company, recently, had a massive wave of reorganizations.  Teams that were once in marketing got moved to sales.  People that used to report into Engineering leaders, were moved under Product leaders.  In my previous company it was worse.  We were constantly restructuring and reducing headcount.  Teams would be cut in half and merged with other teams.

But large reorganizations are the rarity in most companies.  For most teams, change is due to current members leaving and new people joining.  Sometimes it seems that you finally have gotten your team really cooking, when all of the sudden someone leaves.  In reality, most teams lose members or get new members at least once a year.  The global average rate for people leaving a company is around 12%, and this number does not include internal transfers.

On top of all these ‘normal’ sources of change, the coronavirus pandemic might seem like a bomb has gone off in your team or your organization as a whole.  Building your team to high performance has never been more critical, nor more hard.  For one thing, it’s not like we can fully go back to the old ways of working together.  We have to find a new normal, and we need to recognize that the definition of a high performing team has evolved.

Whether you are forming a new team, bringing in a new person, or helping your existing team deal with a new reality, you should be helping your team improve their collaboration and performance.  It is for that reason that I wanted to do a series on how to build team effectiveness.  My goal with these articles and tools, is to help you get back to high performance as quickly as possible.

What you need to focus on during the Forming stage

Since the Forming stage is the first stage, it is the easiest one to identify for your team.  The easiest moments to spot are when you have just come together as a team, or just added a new team member.  But sometimes external events, like the coronavirus can shift your team back to the forming stage, as you try and learn how to work together in a new reality.

The Forming stage tends to generate a lot of energy and questions from the team.  They want to get to know each other better and understand their roles on the team.  At the same time, you might see some anxiety or worrying amongst the team, as people wonder if they are going to fit in.  And in some cases you might see all of the different emotions.  For example, a new joiner to your team might be super excited and ready to start, while your original team members might be wondering if the new person will be able to fill the shoes of their former teammate.

In order to move from the Forming stage to the next stage, the team needs to complete 3 key tasks.

1) Lay the foundations of trust

A team can only succeed if it works together for the betterment of the team, and not just only everyone’s individual priorities.  In order for team members to set aside their personal goals, they need to trust their colleagues to do the same.  So in this initial stage, team members need to get to know each other and start laying the foundation of trust.

This can be accomplished in many different ways.  While people might roll their eyes, icebreakers are a great way to introduce team members and start building relationships.  But don’t feel limited to icebreakers.  Any team activity or conversation that either helps people learn information about each other or share in some collective fun is a great way to start bringing the team together.

Now some of you might think this is a waste of time, because your team already knows each other and trusts each other.  But remember, critical events can destabilize even long formed teams.  So we recommend using the coronavirus pandemic to revisit the trust within your team, especially as it relates to the new norm we will be facing.

2) Align around the team’s purpose

Another key priority for the team is to align around the team’s purpose.  What are the main objectives of the team?  How do these objectives translate into clear tasks or projects?  What kind of KPIs or metrics does the team use to determine success or failure?  This kind of information helps the team understand what it needs to accomplish.

For some of your teams, the coronavirus has dramatically impacted the priorities and purpose of your team.  Don’t just assume that everyone is still on the same page.  Revisit the goals, priorities, KPIs and metrics as a team.  What still makes sense, and what needs to be modified?  These are the types of questions you need to ask when ‘re-forming’ your team.

3) Map out how you will work together

Once the team has built some foundations of trust and has aligned around the team’s purpose, you can start to map out how you will work together.  Collaboration is not something that should be automatically assumed.  It is something that the team needs to foster

There are many different tools that you can use to build team effectiveness during the Forming stage.  Here are 3 of my top recommendations

Build your Coat of Arms

This is a great exercise to run for teams in the Forming stage, as it is a great way to build that deeper knowledge of one another, and do so in a fun and creative way.  Starting in the 12th century in Europe, noblemen would create a Coat of Arms as a representation of themselves. These images would be incredibly personal, and would be painted on shields stitched onto banners and clothes. Basically, a Coat of Arms was the snapshot of what was important to the person at that time, and their chosen designs would alter over time.

In terms of this exercise, a Coat of Arms is a shield that is split between different sections.  Within each section, there is a question that the person needs to draw their answers to.  Example questions could be: What do I think are my biggest contributions to the team?  Are there any challenges that I am facing at the moment?  What do I want to accomplish this year?  But instead of writing out their answers, the person needs to draw out their answers.  Click for more information about running the Coat of Arms exercise.

An Elevator Pitch is basically a concise explanation of why something exists, or should exist.  The reason it is called an Elevator Pitch is that it should be so straightforward and clear that you could explain it during the course of an elevator ride.  When it comes to the Forming stage, I like the team to create a few different Elevator Pitches.  The first one you should do is to describe the purpose of the team.  Every member of the team should be able to explain why this team exists, why it adds value to your organization, and your main deliverables.

The DACI tool is a great way to identify roles and responsibilities for different projects and tasks within your team.  DACI is an acronym for:

D = Driver – The Driver is the one person responsible for the task or project.  It is their job to gather all the information needed to make a decision and make sure the project / task continues to meet its deadlines.

A = Approver – The Approver is the one person with final say on the task or project.  This is the person that will make the decision, and ultimately be held accountable.

I = Informed – There are often a lot of people that need to be Informed of a decision.  Maybe these are customers / other teams dependent on your team’s outputs, or just other parts of the business that need to know.

When it is done correctly, the Forming stage is not that long.  While some people wish it could be done in 1 meeting, in reality it is something that needs to occur over the course of a few team meetings.  This is especially true for teams that have just added a new joiner.  The original members of the team might roll their eyes at ‘getting to know you’ exercises or wonder why they are spending time talking about the team objectives.  For them this is old news.  But this is where you need to remind them that this is all new for the new joiner.

Personally, I have coached too many teams that have sped past this stage, only to find themselves with poor team trust or misalignment down the road.  This is the stage where everyone needs to get on the same page, align on the team’s objectives, and start building the relationships needed for high performance collaboration.  So the next time you are forming a new team, having someone new join your team, or facing some massive change, don’t just rush into business as usual.  Take some time to truly Form the team.