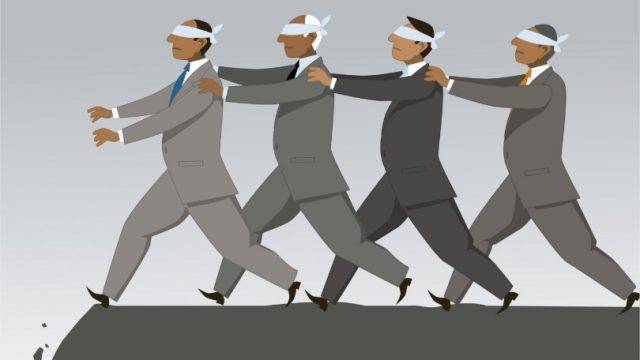 “Unless anyone has any objections…” – Part 1

Groupthink: Cindy was having a really busy Monday morning at Smart Kitchen. She had just gotten off of the phone with two of her HR managers; one wanted to tell her that one of the company’s top talents had just resigned, and the other wanted to complain about a local leader creating a difficult work environment. She was trying to put out those fires, when suddenly she realized she was late for the weekly executive team meeting.

Cindy quickly walked to the meeting, and sat down next to the Head of Manufacturing Ted. She had always liked Ted, and seemed to really appreciate HR’s perspective to the business. Sometimes he could be a little dominating, but overall, he was a good guy. On the other side of Ted sat Sofie, the Head of Marketing. She was relatively new to the company, having just come from a small Bio-Tech company. Even though she had no kitchen appliance experience, Cindy had championed for Sofie to get the job, and so far, she had brought a great new energy to the team.

Rupert, the Head of Sales, came in chatting with Jim, the CFO. Both seemed to be taking their time talking about their weekend activities. No one was really paying attention to the CEO, Jesper, at the front of the room. Cindy thought he looked a little stressed, as he walked back and forth in front of the presentation.

“Now that everyone is here, we can begin” grumbled Jesper. “This weekend, I was playing golf with Matt from Fasttrack Distributors. I don’t need to remind you that Fasttrack accounts for about 15% of our sales, and is a top partner in getting our products to market. Well, it is because of that relationship that Matt wanted to give me a heads up. It seems, that Cooking Tech is launching a new microwave that you can control with your phone. Fasttrack is supposed to get the first shipments in 3 months. I want a plan for how we can beat those smug Cooking Techies.”

Silence filled the room, and a lot of eyes waited for someone else to speak first. Finally, Rupert spoke up. “Our own smart microwave is still 6 months off, but we could probably cut that time in half. Ted, what do you think?”

Eyes shifted to Ted, who was looking through his papers. “We could do it, but in order to have the product in 3 months we will have to reduce some of our features. The coding and testing for our main features just won’t be done in time. In 3 months, we could produce a ‘semi-smart’ microwave.” Cindy chuckled.

Smiling, Jim added “Most of the Cooking Tech people I have met could be described as ‘semi-smart’, and I’m willing to bet good money that their microwave is only semi-smart as well. Their products are nowhere near ours in terms of quality and functionality. Even if we reduce our quality for the first launch, I’m sure it will be better than Cooking Tech’s.”

“I agree” said Jesper. “We all know that being first to market is critical in our field. That’s who our customers will associate with from then on.”

“But doesn’t that go against our brand” asked Sofie. “We always aim to have the features that customers need. Why should we decrease our quality now?”

“Listen, Sofie, the appliance industry is just different than Bio-Tech” replied Rupert. “We always have time to improve our microwave later, but we only get one shot at being first.”

Sofie looked she was about to say something, but then she bit her lip.

Leaning forward on the table, Jesper confidently exclaimed “Unless anyone has any more objections, I think we get to work immediately on launching our own microwave in 2 months. Who is with me?”

Ted, Rupert, and Jim were all nodding their heads, while Sofie sat with her arms crossed.

We’ve all been in a situation where everyone else seems to be going along with an idea, and when it gets to you there is a lot of pressure to agree like everyone else. Since human beings have evolved as social creatures, the desire to be a part of a group is significant, and it can take a lot of courage to stand alone from the group. We want to be part of the ‘ingroup’, and our natural reaction is for harmony amongst the group.

But this natural desire for harmony in a group can lead to dysfunctional decision making and a lack of innovative ideas. People choose not to ‘rock the boat’ and so they avoid conflict. Whether that means not challenging someone’s idea that you know is faulty, or not putting new alternatives on the table. By seeking this harmonious consensus, we end up with less creativity, less critical thinking, and overall riskier decisions. This bias is called Groupthink.

It was first described by Yale psychologist Irving Janis in the 70s. Irving wanted to understand how groups make decisions, and so he started by understanding the decision-making process in some historical failures in American foreign policy. The two most famous examples were how the American Navy ignored data about a potential Japanese strike on Pearl Harbor, and how the CIA and the President convinced themselves that the Bay of Pigs would be a resounding success. Through his analysis, Irving found that groupthink was at the center of each of these failures. In each situation, an idea was formed, contradictory viewpoints were suppressed, and decisions were made with only a fraction of the potential information.

Janis identified 8 characteristics of groupthink. Think about your team, and see how much you fit these groupthink behaviors:

When a team falls under a Groupthink mindset, poorer decision making will follow. And unfortunately, some of these characteristics are easy to fall into, especially for high performing teams. A team that has had success after success might start to believe in their own hype and might have extra pressure for the team to remain a success. And just like that, a once high-flying team has crashed and burned.

What can we do about it:

Groupthink is clearly a problem, and one that we should be one guard for in our companies. Thankfully we all can play a role in helping teams make the best decisions. In addition to focusing on the content of the decisions, we should also pay attention to the decision-making process and the dialogue among the colleagues. We should be hyper-vigilant and watch out for the Groupthink characteristics, and when we see them we need to be brave enough to call them out. What good is a seat at the table if you are just going to stay silent. Being brave is one of the best ways to counteract Groupthink.

But just like in your personal health, preventative actions are far better at maintaining a healthy group dynamic. There are 4 easy actions that can help a group make unbiased decisions:

By taking these preventative measures you significantly reduce the risk of groupthink, and if it does occur, then it is up to you to call it out.

“Unless anyone has any objections…” – Part 2

Cindy paused for a second before speaking. “Actually, I not sold just yet. I think this is definitely one way we can respond to Cooking Tech, but I wonder if there are other options. Jesper, do we need to decide our actions this minute or can we take the rest of this meeting to explore some alternatives? In the worst case we spend the next 30 minutes discovering that the original plan was best all along. But maybe there are some better ways to respond to Cooking Tech.”

“You’re right, you’re right” sighed Jesper. “30 minutes won’t kill us. I just really dislike Cooking Tech. Sofie, you were initially against the idea. What other options do you see?”

With a big smile on her face, Sofie began to lay out her thoughts. “Instead of the microwave, I think we could speed up the launch of our smart oven, which is better suited for our current target customers. If we…”

Highlight and Tweet it – High performing teams are sometimes the most susceptible to Groupthink. A team that has had success after success might start to believe in their own hype and might have extra pressure for the team to remain a success. Do something about it. #HR https://wp.me/p9toKb-5k