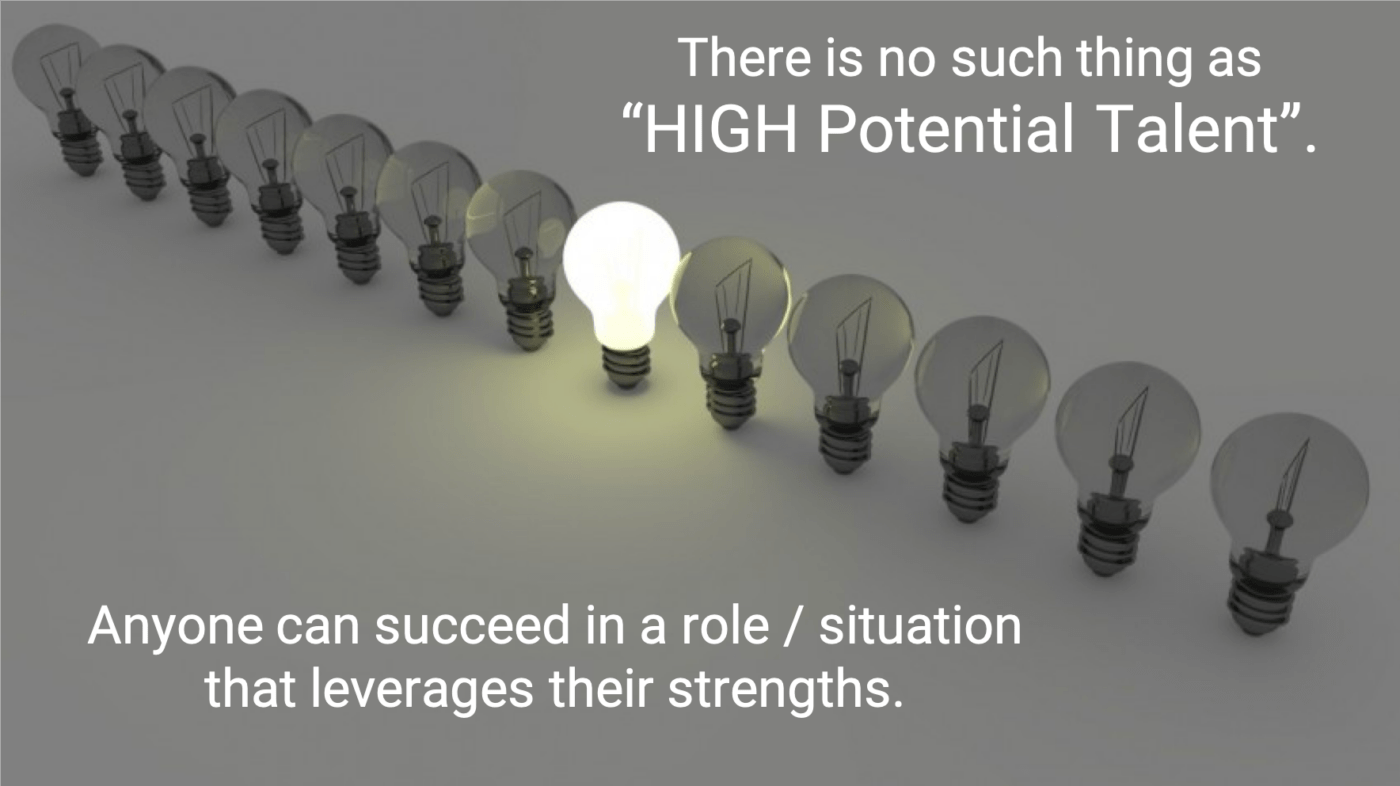 These statements just seem like common sense.  What company wouldn’t want to make sure we are tapping into the fullest potential of all their people?  Or what leader would want to risk missing the superstar hidden within their organization?  There is not doubt that untapped potential is a horrible waste, not only for the individual but also for the team and for the overall company. But while all 3 of these statements make sense, one of them is just a lie we tell ourselves.

For the longest time I agreed with all 3 of these statements, and never even thought to question any part of them.  That is until I read the book “Nine Lies About Work: A Freethinking Leader’s Guide to the Real World” by Marcus Buckingham and Ashley Goodall.  Nine Lies uses research, data, and engaging stories to identify and dismantle some of the most common beliefs we hold about work and replace them with simpler truths.  I can personally attest that some of my core beliefs about leadership and high performance were completely shook up.  For example, Nine Lies has inspired me to move away from leadership competency models, and instead develop leaders around their unique strengths.

My personal belief is that every senior leader and HR manager needs to read Nine Lies, and that is why I am going to introduce you to the 9 different lies in the book.  For example, I have previously shared Lie #4 – Great Leadership can be defined by a set of competencies and skills.  The truth is that great leaders are unique, and there is no recipe for great leadership. My goal is to give you an overview of the 9 lies, and help you integrate the truths into your teams.  But even my articles cannot replace the whole book, so I hope that you buy this book.

How Can We Measure “Potential”?

Harvard Business Review defines High Potential employees as those employees who “consistently and significantly outperform their peer groups in a variety of settings and circumstances.  They show a strong capacity to grow and succeed throughout their careers within an organization – more quickly and effectively that their peer groups do.”  With that kind of definition, what manager wouldn’t want more “High Potential” employees on their team, and what employee wouldn’t want to be labelled as a “High Potential”?

Assessing someone’s potential rests on the assumption that we can predict their future success.  The sad reality is there are few reliable or accurate ways to predict the future performance of people.  Qualities such as intelligence, drive, agility, or leadership all sound like good predictors of a person’s potential success, but the evidence just isn’t there.  At the moment the best predictor of future performance is past performance, and even that has limited reliability.

Problem 2 – Your Performance is Situational

Rating someone’s potential assumes that potential is something that they have across many different situations or roles.  It doesn’t matter the circumstance, they still have potential.  But in reality, performance is heavily influenced by the situation the person is in.  If we put a person in a situation that requires all their weakest traits, then they will probably struggle, no matter how much “potential” they have.  On the flip side, if we take someone with little to no “potential”, and put them in a situation that perfectly aligns to their strengths, they are more likely to succeed.

Problem 3 – People struggle to assess abstract concepts of others

Countless research has shown that people are not able to reliably assess other people.  How similar the people are (in-group bias), if the person was recently nice to the assessor (recency bias), and even the assessor’s self assessments have been shown to bias the assessment of the person. The best types of assessments are those that rely on observable behaviors of the person. Unfortunately, someone’s “potential” to be successful in the future isn’t something you can observe or experience before it happens.

Stop Thinking of Potential.  Instead Focus on Momentum!

So if potential can’t really be measured in any meaningful way, what can we do?  Do we just forget about identifying talented people?  The answer isn’t to stop looking for talented people to invest in, develop, and promote.  We still need to do all of those things.  So instead of trying to measure something that is immeasurable, we need to change how we measure talent.

As the alternative to “potential”, Nine Lies introduces the concept of assessing someone’s momentum.  If you remember your high school physics, momentum is equal to the mass of something multiplied by their velocity.  In human terms, your mass is made up of your traits and skills.  Those specific things that you bring to the table.  On the other side, your velocity is comprised of your past and current performance.  Basically it is how successful have you been in your current role.

Unlike “potential”, a person’s mass (their skills and traits) and their velocity (their recent performance record) are both measurable.  We can observe them, and assess them with a reduced amount of bias.  Additionally, a person’s “momentum” is situational.  A marketing manager might have a lot of momentum in regards to a marketing director role, as they have relevant skills/traits and a relevant performance record.  At the same time, the marketing manager would have no “momentum” in regards to a finance director role.

Finally, “momentum” is something that can be improved.  One of the biggest drawbacks of “potential” is that it is very static.  The person either has “potential” or they don’t.  But traits/skills (the person’s mass) and their performance (their velocity) are both things that a person has some control over.

Momentum + Values is the Way Forward

My favorite aspect of the concept of Momentum is that it empowers employees and managers to grow and develop.  It is a whole lot easier helping someone improve their traits, skills, and performance, than it is trying to improve their “potential”.  It is also better from the employee’s perspective.  Gone are the days of being judged on some intangible quality, and instead they are assessed based on things that they can impact.

Personally, I think that “potential” should be stricken from the tongues of every manager and HR leader, especially when it comes to making strategic talent decisions.  Instead, I think that the company’s Values should replace “potential” as something we assess talent against.  Too many people are assessed on “what” they accomplish, and little thought is given to “how” they accomplish it.  But if we ignore the “how”, we risk ending up with a selfish, me-first culture.

The truth is that we can’t invest in everyone.  We need to be able to differentiate between those people we should invest in, and those people who we should just appreciate for their contributions.  So we shouldn’t stop trying to identify talent.  But instead of using a flawed metric like “potential”, let’s use things we can measure: their momentum (strengths x performance) and “how” they accomplish their goals (alignment to the company’s values).